An incredible four churches are visible from Ha Ha Farm 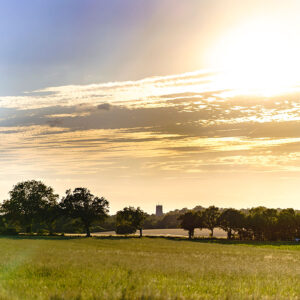 Ha Ha Farm is certainly in a unique setting, as not only will find a peaceful landscape, tranquillity among the trees and rolling views of patchwork countryside, but you will also be witness incredibly to the fact that four church spires, from four neighbouring villages are visible from the farm. As you stand in Ha Ha farm and take a 360-degree turn, you can remarkably take in the four churches and all of their magical beauty and history. A rare and wonderful sight to view indeed…

The first of the four churches is the Strumpshaw St Peter church, with the year 2007 celebrating the Parish Church of St Peters in Strumpshaw for two reasons. Firstly, the 750th anniversary of the institution of the first incumbent of the church in 1257 and the fact that the church has stood both spiritually and physically in the centre of our village since that time.

The second is the Church of St Michael and All Angels, Braydeston, and this is mentioned in the Domesday Book of 1086 no less, and almost certainly stood on the current site. Part of the exterior wall on the south side showing the faint outline of a doorway since filled in with flint, is possibly of Saxon date. A little to the west of this is another ancient doorway, now bricked in, of a later date.

The third is St Andrew and St Peter church, Blofield. Riding the crest of the hill like a great ship, St Andrew is the largest of the churches in the marshes between Norwich and Yarmouth. The parishes around here are tiny, and ‘packed like squares of wheat’, but Blofield and its neighbour Brundall form a kind of metroland to Norwich, outer suburbs connected to the city by train, and full of lovely early 20th century villas.

The setting of St Andrew is far from suburban, being the church lane on the edge of the old village, with some pretty houses for company. The great tower, one of the tallest in Norfolk, matches the wide aisled and clerestoried nave perfectly, and they were all built together in the early part of the 15th century, according to will evidence.

And lastly the St Peter’s Church, Lingwood. A medieval parish church, dating mainly to the 14th century, with some earlier work. A medieval wall painting of St Christopher was discovered in the nave in 1965. An evaluation of the church by the Norfolk Archaeological Unit in 2004 recovered fragments of a highly decorated medieval floor tile. The church was opened in 1867 to serve a small rural population that has now transformed into a dormitory village for 2,500 residents.